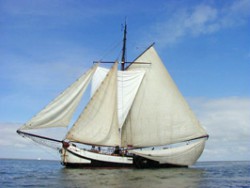 The picture shows the “Spes Mea” under full sail. Mainsail, foresail and jib are the standard sails. The additional sails are the square foresail and the watersail. The mainsail is operated with a winch and the other sails are set with ropes.

The next picture shows the standard rigging of a tjalk (a historical Dutch sailboat used for cargo). It is evident that the Spes Mea is one of the few tjalks with a yard (horizontal spar at the mast). With it you can set an additional large sail when navigating downwind; this is the square foresail with a surface of 90 m2. This sail is the only one belonging to the square rigging of the ship. The square foresails were used by tjalks navigating on the high seas.

Under the boom you can set the watersail downwind and with backstay wind. Besides the standard jib there also is a large jib on board for lighter wind. The total sail surface on board is 390 m2 of sailing pleasure. 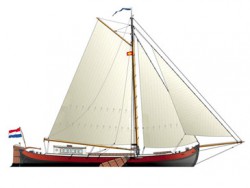 Alongside the ship there are leeboards, large wooden planks which are lowered into the water to prevent the ship from drifting. Flatboats don’t have a keel.

You can recognize the tjalk from her bulbous bow and stern. The gunwale is the upper edge of the hull; on a tjalk it is slightly inside shaped. The sheer strake is specially reinforced at the bow and stern of the ship. The bow and stern beams are reinforced as well. At the stern there is the so-called outboard rudder. Often there is a tiller on top of the rudder. But many larger tjalks have a steering wheel nowadays, the “Spes Mea” does, too. This tjalk is a type of historical Dutch sail and cargo ship which used to be made exclusively from wood. From 1880 on these ships were made of iron. The materials changed but the type of ship remained the same. The flat bottom especially is a typical characteristic of this type of ship. Tjalks, but other types of ships as well, are called flatboats. These flatboats are able to navigate large parts of the Wadden Sea and the IJsselmeer at low tide with an extremely low draught of about one to one and a half metres.

More information about the engineering of the “Spes Mea” can be found on the page technical information.