The history of the Spes Mea 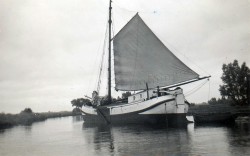 The Spes Mea, a high seas’ tjalk from Groningen, commissioned by Jan Dost, was built at the shipyard Boerema in Martenshoek (near Hoogezand, Groningen) in 1902. She was launched as a sailing coaster with 91 GRT (gross registered tonne = 2,8 m3) and transported salt, wood, coal and cattle to England, Norway, Sweden, Denmark and Germany. She sailed the Belts, the waters of the Baltic Sea, therefore she was called a Belt Navigator. 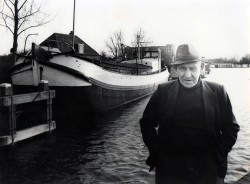 In 1924 the Spes Mea was taken over by R. Krook. Together with his wife and son he used the ship as cargo vessel. When in1938 the Spes Mea, compared to the larger cargo vessels, wasn’t competitive enough anymore, she was turned into an inland barge (the last trip at sea with a load of peat had taken a month and didn’t bring in more than 300 guilders). With inland waterway transport the maximum of water displacement was 168 tonnes and the cargo was mainly bulk goods. Krook sr., fortunately, was rather conservative; when other skippers built larger vessels and removed rigging, he continued to sail. Krook jr., on the other hand, was fed up with sailing; as soon as he took over the ship from his father, he removed the only small engine immediately and replaced it with a 2-cylinder Deutz with 38 hp. The rigging was removed to make room for a larger cargo hold. This was done in 1954, much later than on other barges.

From Houseboat to Sailing Charter 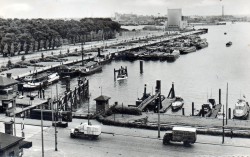 In inland navigation the barges were built larger and larger and the Spes Mea became old-fashioned soon. In 1968 Krook jr. stopped with commercial transport. The ship was moored permanently in Purmerend and Krook jr. became a bridgeman. Until his death in 19

87 he lived on the Spes Mea. After that the ship had various owners and was converted into a houseboat, until in 1989 the Spes Mea was sold to Jan van Berge. He had known the ship as a boy, visited the then owner. Jan van Berge restored the Spes Mea to her former glory and made her what she is today: a beautiful, proud high seas‘ tjalk.

In 1998 the ship, as a comfortable sailing charter for up to 20 guests and Harlingen as home port, became the property of Klaas Bosch and Danny Munnikes. In 2003 Danny left the business which made Klaas Bosch the sole owner.

In our gallery you can find photo books with recent pictures and of days gone by.